How COVID-19 (Coronavirus) Impacting Courts, Trials and Service of Process 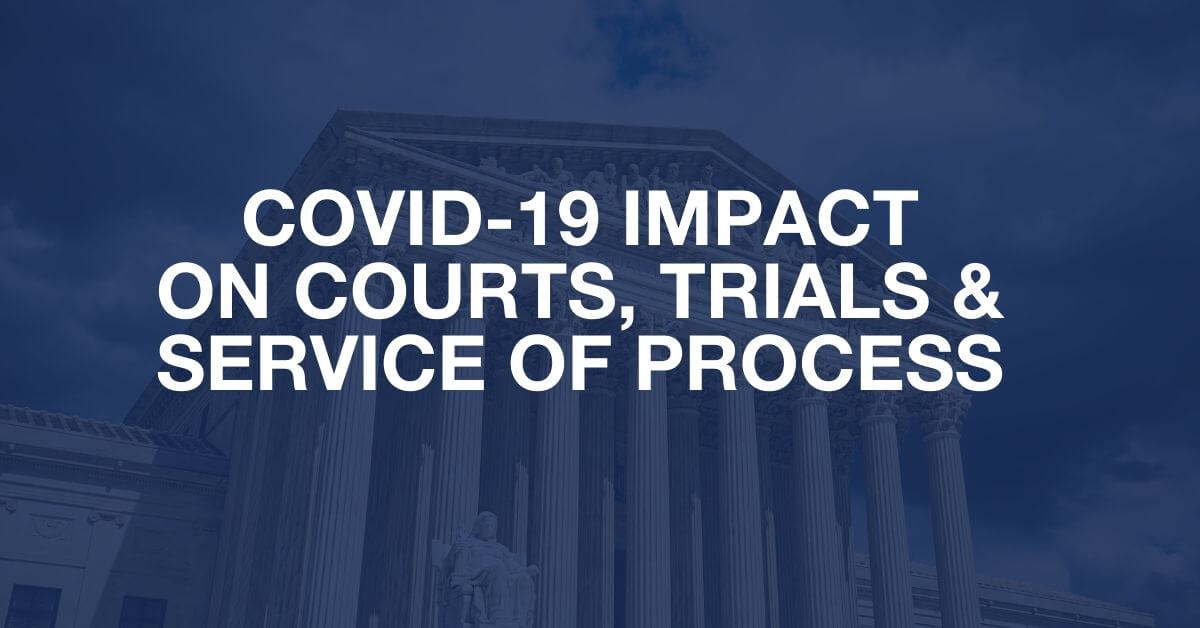 Just as it’s impacting every other facet of life around the world, COVID-19 (coronavirus) is having a significant impact on service of process and the legal system. As courts adjust their operations in accordance with Center for Disease Control (CDC) recommendations, we’ve seen significant changes to how the legal system is moving forward: videoconferencing for oral arguments, suspension of trials in certain circumstances, and restricted access to courthouses.

In addition to these changes, courts are also implementing other changes, such as the suspension of foreclosures and sheriff sales. Similar to previous moratoriums or suspensions, it’s likely that once the courts return to regular operations there will likely be a backlog in the legal system as everyone works to catch up on weeks and months of legal issues.

In an effort to reduce the contact between individuals, courts have continued civil or criminal trials for a number of time frames. Here are some of the states that have issued orders regarding the continuance of trials:

In the Southern District of New York, Order M10-468, any personal service has been suspended until further notice as of March 13, 2020. This order doesn’t apply to mail or electronic service.

Additionally, state wide orders which require all non-essential personnel to stay home will also impact the ability to effectuate service.

In other states, process servers remain uncertain as to what the next weeks will bring for service in their jurisdiction.

The National Association of Process Servers President, Jillina Kwiatkowski, has sent a request in to the Governor of New York, Andrew Cuomo, requesting guidance as to how to proceed with service. Jillina requested the Governor declare a moratorium, as well as a tolling of statute of limitations and a fixed time period for serving and filing documents. Read the full letter here.

While these changes are necessary in order to comply with the CDC recommendations, continuing to allow electronic service and cases to move forward where possible without needing to be present in person will help reduce an inevitable backlog once the courts resume their previous operations.